A downloadable game for Windows, macOS, and Linux

Life and Debt was released on Steam on February 28th, 2018. Check it out here:

*THE LUDUM DARE ORIGINAL SUBMISSION IS THE VERSION LABELED 0.0.1*

Life and Debt is a game created during Ludum Dare 40 with the theme: "The More You Have, The Worse It Is". It was created for the Jam portion which gives the creators 72 hours.

BUGFIX: Fixed a bug where financing an item would change the cost to $0 when one month was left.

BUGFIX: Pay down debt button now updates as it was intended to when applicable.

BUGFIX: Fixed a bug where late bills compiled interest every day instead of once.

BUGFIX: Fixed a bug where item counts did not update if multiples of the same item exists that month.

- Alerts now stay blinking within 7 days of being due.

- All objects now sit in front of paintings on the wall.

- Added scratch off lottery tickets that require Cash only.

- You now can get promoted!

BUGFIX: Fixed a bug that caused player's sort order of body parts to appear out of order.
BUGFIX: Fixed a bug that caused the cash to be deducted incorrectly when paying off a financed item.
- Larger life events moved to "One-Time" instances.
- Increased in game speed from 3 seconds per day to 2.5 seconds per day.
- Added a pay in full button to all financed items
- Now a chance to lose any job.
- Changed the shop screen for more clarity.
- Changed the newspaper classifieds screen for more clarity.
- Changing jobs no longer keeps your last pay cycle.
- A few other small improvements and fixes

Music provided by Artists on Newgrounds.com:

Life and Debt was released on Steam on February 28th, 2018. Check it out here: 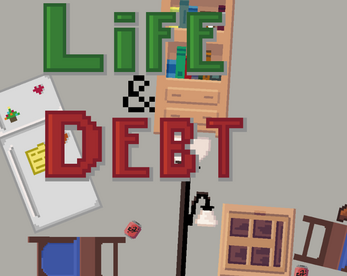